The Indian government has banned 59 Chinese apps. These also include popular apps like Tik Tok, UC Browser, Helo and Share It. In such a situation, users using these apps must be having trouble and they must be wondering which apps they should use now? If you are also one of them then you need not worry. We Indians still have a better option than all the apps in China. In this article we will give you top chinese banned apps alternatives in Hindi Will tell about which you can use instead of China apps. Complete list of replacement of 59 apps. 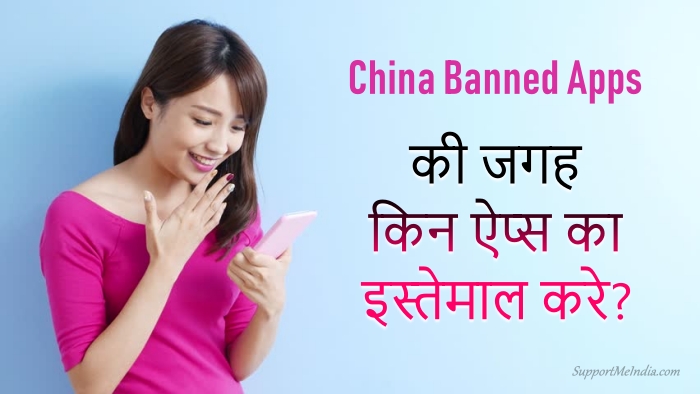 You must be wondering whether there are other apps available as an alternative to Chinese apps? If so what are those apps? These are some of the questions which are running in everyone’s mind. We are giving you the answers to them in this article.

Out of the 59 apps banned by the government, the maximum 18 apps belong to the utility category. 8 apps are video sharing. There are 6 social media apps.

We Indian users have many options available to them. The best part is that the options for all these 59 apps are available on the Google Play Store and iOS platforms.

So let us now tell you which apps to use instead of these 59 banned apps of China? china banned apps ki jagah kaunse apps use kare in hindi? chinese banned apps alternatives?

Before we tell you the alternatives of these china banned apps, we would advise you that as a responsible citizen, you yourself should stop using all these apps, because now these apps have become illegal.

Barring just a few apps, all have alternatives, so you don’t need to panic. You may be a tiktoker but country should be first for you.

People are asking different types of questions on social media regarding the ban of China apps. That is why here we are giving answers to some important and important questions, so that you do not have to go anywhere else for them.

Q. How will the government order be implemented?

AnsThe government will soon issue instructions to Google to remove these apps from the Play Store and Apple from its iOS platforms. Then all these apps will be removed from google play store and app store.

Apart from this, the Internet Service Provider (ISP) will be ordered not to access the data of these apps and telecom companies will not be provided network to them. Then these apps will stop working completely.

Q. Why is this app still on Google Play Store and Apple Store?

Ans: The government will soon order google and apple company to remove these apps from google play store and app store. Till then they can be downloaded from App Store and Play Store.

Some people are saying that these can still be downloaded from App Store and Play Store, so what kind of ban is this. So tell them to wait a little now, after some time all these will disappear.

Ans: Companies that provide Internet networks to users. Like- Airtel, Jio, BSNL etc. They give internet network to the users in two ways.

The Internet Service Provider (IP) does the work of giving the network of these companies to the users. Internet companies just have to put a filter after the instructions of the government. After that users will not be able to access any data on it.

Q. What will happen to the personal data of the people?

Ans: Users using Chinese apps should download their important data and documents in their mobile soon. Because now in one to two days these apps will be completely closed.

All app companies have their servers in China. If technically these companies do not delete people’s data, then their data will not be deleted. But despite this, users will not be able to access their data.

Q. Will the app be deleted by us too?

Ans: Apps will not be automatically deleted from your phone, you have to delete them yourself. You won’t be able to use them anyway. That is, you will not be able to see your photos, videos and other files on those apps.

Q. Will those who already have apps in their mobiles be able to use them?

Ans: off course not. These apps are completely banned. It doesn’t matter whether you have downloaded before or you are downloading now. Now no citizen will be able to use these apps in India.

Q. What kind of privacy were breaching Chinese apps?

Ans:China Apps were unsafe. Because when you install an app, you have approved that it can access your photos, videos, messages, files, data.

At present, in the situation between India and China, Chinese companies can do anything with our data. The old record of China is also not reliable in this matter. He is also an expert in cyber attacks.

Last question: what will happen now?

If encouraged, such apps can be made in India also (Chinese banned apps alternatives). Anyway, China isn’t a software power, it’s just a hardware power. Such apps can easily be made in your country too.

Just a little financial incentive will be needed. Right now our startups have to struggle a lot. Many of our software developers work for foreign companies.

Apart from this, foreign apps already exist in India, so they are not made, so native startups do not make such apps. Whereas most foreign apps are banned in China. That’s why more local apps are made there.

And then there the government gives more incentives as well. But our apps can also be popular in the world, it just has to be a little innovation. Many apps in our country are also very popular, such as Paytm, Share Chat, Philip Kart etc.

Do share this article with your friends so that they can also know about Chinese banned apps alternatives.

No comments to show.